Thousand Knives is one of the final bosses in Dariusburst. Resembling a massive mechanical lionfish, it mainly attacks with dozens of blade-like drones that can fire lasers of varying sizes.

A Belsar Flagship in the shape of Lionfish. The Warship itself carries various units that can detach from the hull and interact by themselves, giving the warship an almost 360 degree firing range. The units themselves are fragile, but powerful. The units can also give laser formations that can trick and trap opposing fighters. The burst gun is attached to it's most powerful units.

A flagship similar in shape to a lionfish. Specializes in all-range attacks with fin-shaped separation units provided on the whole body. The separation unit has a well-balanced function of offense and defense, such as being deployed around the ship as a fixed turret, being scattered and attacking to surround the enemy, and being densely protected from enemy fire.

Burst cannons can be fired by concentrating energy by collecting more than a certain number of separation units. Even more threatening than the burst cannon is the maximal beam launched forward. This beam, which swallows almost all of the combat zone, cannot be avoided unless it goes into evasion before firing. You need to be careful, even after you have successfully countered it, because it is fired right after the burst.

It has been reported that when all the separation units are destroyed, a field such as light is emitted from the junction of the units. Details are unknown, but it is likely that surplus energy is being released from the burst engine.

An attack ship in charge of escorting the resource planet of Belsar's army. With a fan deployed around the ship, it can fire as a fixed turret, and can be spread out to perform all-range attacks. 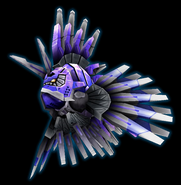 As seen a the website for Dariusburst
Add a photo to this gallery
Retrieved from "https://darius.fandom.com/wiki/Thousand_Knives?oldid=12853"
Community content is available under CC-BY-SA unless otherwise noted.