Syvalion is a trackball shooter originally released in 1988 for Arcades in Japan only. An international version was made and scheduled for release in the subsequent year but ultimately scrapped, though a prototype ROM can be found. It was also released for the Sharp X68000 and later ported to the Super Nintendo in Japan and Europe. It was also re-released for PC, PS2 and Xbox as a part of Taito Legends 2 in 2006.

The game was designed by Fukio "MTJ" Mitsuji, who is also responsible for the Bubble Bobble series, and Hisayoshi Ogura from Zuntata. It is a spin-off of the Darius series, with it's story being connected with both Darius and Raimais, another Taito game.

Upon starting the game, the player can choose between three different gameplay modes.

Syvalion is unique in that it features a non-linear story, played in the form of "scenarios": each time you boot the game, a different scenario is chosen at random. The story is told from the perspective of the unnamed hero, in the form of diary entries. Before each chapter, a small text appears detailing the plot so far. Depending on your performance in the stage, the story will change in various manners. It is said that Syvalion has more than 100 different endings.

The general plot deals with an alien race (apparently called Varia) which is invading Earth and kidnapping humans to turn them into robotic slaves. Depending on the scenario, the unnamed hero will either steal the Syvalion from them or receive a distress call and then fight them. Along his journey, he meets with various characters (again depending on the scenario), like an old scientist, a mysterious woman, a injured survivor, a clone of himself and even Proco from the first Darius. Each of these characters may give various temporary upgrades to the Syvalion. 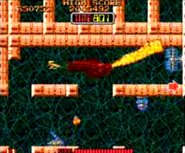 Retrieved from "https://darius.fandom.com/wiki/Syvalion?oldid=11420"
Community content is available under CC-BY-SA unless otherwise noted.