The Silver-Hawk model 3F-1B is the Silver Hawk model from Darius. It was created using technology from the planet Darius, and was piloted by Proco and Tiat. This ship is sometimes mistaken for being the first Silver Hawk, which was actually a model ARCF-06A first piloted by a unknown pilot, and later by Sameluck Raida for a short time.

Taken from the Darius attract mode

This ship is designated as the Origin Silver Hawk in Dariusburst, the mobile enhanced port Second Prologue and the Another Chronicle sequels. In the original game and in the mobile port Second Prologue, Origin must be unlocked. This ship functions as it does in the original Darius, including its Wave shot being able to penetrate both enemies and terrain. While it has no Burst Engine like Legend does, Origin has its shot and bomb firepower oosted to compensate for this. That said, due to the low number of Shot projectiles allowed on the two screens of Another Chronicle – particularly for Wave-level shots – Origin must stay close to enemies and bosses to concentrate Bomb damage; as a result, this ship is considered one of the more difficult to use effectively.

The description text in English taken directly from Dariusburst Chronicle Saviours in AC Mode reads as follows: “Call sign ‘Origin’. The legendary craft that has long protected the people of Darius. Its lack of a Burst Engine prevents it from firing a Burst Beam.” 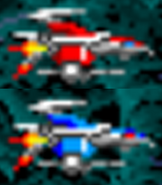 As seen on Dariusburst: Another Chronicle website
Add a photo to this gallery
Retrieved from "https://darius.fandom.com/wiki/Silver-Hawk_Origin?oldid=10447"
Community content is available under CC-BY-SA unless otherwise noted.