The Legend Silver Hawk Burst is a Silver-Hawk spacecraft from Dariusburst and is piloted by AI Terminal Ti2. This ship is the first Silver-Hawk built with the new Burst Engine system. Besides from this, the weapons are directly based from the Silver-Hawk model 3F-1B. 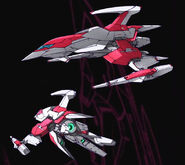 As seen on Dariusburst: Another Chronicle website
Add a photo to this gallery
Retrieved from "https://darius.fandom.com/wiki/Silver-Hawk_Legend?oldid=12640"
Community content is available under CC-BY-SA unless otherwise noted.