Red Crab is a boss from Darius II. It is shaped after a fiddler crab.

A battleship equipped with huge scissors, built for ground battle. Because there is no propulsion capabilities in the main body itself, since movement depends on its leg units, if the legs are damaged, it becomes inoperative.

Red Crab will mostly walk around the ground and jump to crush the player, also attacking by spreading bullets everywhere. Before damaging the boss the player must destroy all limbs on both sides until only the two bottom legs are left. Once one of the legs is destroyed the boss will become immobile but turn more aggressive, using the bullet spread constantly as well as shooting green energy rings.

Red Crab moves along the bottom of the screen, shooting orbs in arcs and yellow lasers which turn 90 degrees when aligned with the player. It can only be damaged after its claws are destroyed, at which point It will start shooting orbs in random patterns.

In Sagaia for the Game Boy Red Crab does a lot more bouncing around than before and also crowds the player more often than before. Its claws are destructible as before, and Its attacks consist of lobbing orb projectiles in a spiral (like the green rings in Sagaia) and homing missiles. Its weak spot can be hit from the beginning. After blowing its left claw it will keep jumping while shooting its usual bullet arc with 2 missiles.

During the second encounter it will use the same missile attack, but now it launches one orb at once, which doesn't fly but bounce on the ground. Its attacks are the same after blowing its left claw but now it constantly jumps. 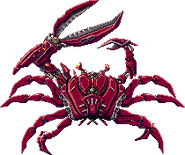 As seen in Darius II at Zone G

As seen in Sagaia (Gameboy) (Screen Cap taken by Tar-Palantir)
Add a photo to this gallery
Retrieved from "https://darius.fandom.com/wiki/Red_Crab?oldid=12679"
Community content is available under CC-BY-SA unless otherwise noted.