Mystic Power is a boss introduced in Super Darius. It is shaped after a ammonite.

A battleship for local area control built with the shape of an "Ammonite". When navigating, the tentacles are stored inside the shell, and when it reaches the battlefield, deploy them to go into combat mode.

Mystic Power only has two attacks: shooting yellow crescent waves and sending anchor drones at the player. In Super Darius II it only shoots a laser forward from its eye, tough the battle is made harder due to its tentacles blocking the player's fire. 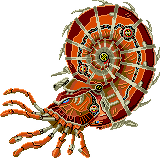 As seen in Darius Plus Zone Q