Mirage Castle is the fourth boss from Dariusburst. It is shaped after a porcupinefish.

Lurking in the depths of space is a flagship in the shape of a long-spinned Porcupinefish. The ship itself is small, but attaches to a heavily armored unit that protects the ship from attack. Operating the armored unit allows it to utilize the various destructive weapons the unit possesses. The programming of the unit has been set to eject all the sections in case of heavy damage to the main warship. The warship itself poses various lasers that can bend sub-space to ambush foes. It also posses a Burst gun that fires in a short, but powerful burst.

Flagship that is similar in shape to the porcupine fish. Than the same type ship that has been confirmed in the past campaign, weapons have been strengthened. Body covered with armed armored unit, Phantom Castle type None flagship body and Thailand, the two bodies are aligned Dual Spin known to be a. Phantom Castle type Compared to the flagship, but is it the same that it has been supplying the unit from the sub-space factory, weapons of small ship there is a difference that usually bombs and guided missiles. Because it is covered with a thick armor, not a pinpoint attack is effective interception by silver fork with a range of attacks.

An attack ship that can be operated on par with a large ship by installing an armored armor unit on a small ship. Units whose damage exceeds a certain value are bargeed (separated and discarded), and aircraft repair work after the end of the battle can be completed simply by installing units sent from the Sub Aircraft Factory. 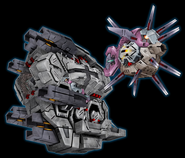 As seen on Dariusburst: Another Chronicle website
Add a photo to this gallery
Retrieved from "https://darius.fandom.com/wiki/Mirage_Castle?oldid=12850"
Community content is available under CC-BY-SA unless otherwise noted.