Metal Black is shoot 'em up video game originally released in 1991 for Arcades. It was later ported to the Sega Saturn and, as part of Taito Legends 2, to Windows, PlayStation 2, and Xbox.

The year is 2042: A companion star of the planet Jupiter appears a few Astronomical Units away from the planet and not long before its discovery propels the asteroids along Jupiter's orbit which sends a wave of meteorites towards the Earth. As the Earthlings struggled to survive, extraterrestrial cybernetic invaders from beyond the distant star used the meteorites as cover for invading Earth with little resistance, intending to plunder Earth for inorganic materials needed to sustain their forms. Both the aliens and the star they came from were quickly dubbed Nemesis.

What resistance the aliens did face from Earth's combined international defense forces were quickly obliterated by the alien's powerful beam weapons. Earth's scientists studied the molecules that powered the alien's weaponry which started to litter the Earth and called the molecule 'Newalone.' With Newalone in their hands, scientists quickly began Project Metal Black, which focused on developing at least twenty-thousand human space craft capable of wielding the same beam-weaponry as the aliens. The space craft was known as the CF-345 Black Fly, named by its method of Newalone energy use.

However, ten years after the invasion, Earth's remaining diplomats passed a treaty on to the aliens under a peaceful surrender, which promised to keep all of Earth's remaining forces from attacking: This applied to Project Metal Black which sealed the Black Fly space craft from the people. The Earth's natural resources were dying and the planet's population was thinning... it was only a matter of time until someone discovered Metal Black and struck back.

Metal Black shares elements with Darius series; and it's subsequent influences on later Darius installments, can be seen throughout the game. These include: 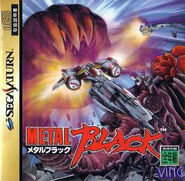