Leadain is a boss from Darius II. It is shaped after a Purple Sea Urchin (Strongylocentrotus purpuratus).

A mobile weapon with four tentacles and sharp needles covering its outer shell. Biological parts are used for the core, and after the exterior is destroyed, it is capable to continue battle only with the bio-unit.

Leadain will stay on the center of the screen and swing it's four tentacles, eventually extending them to attack the player directly, all while shooting it's needles in all directions. After the tentacles are destroyed, Leadain will attempt to use it's outer shell to crush the player. After it takes enough damage the shell will explode, leaving only the center. It will extend a tentacle to once again attack the player while shooting pink energy spheres and lasers. 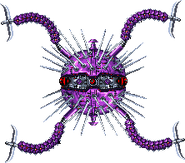 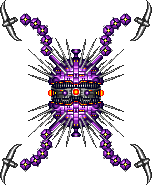 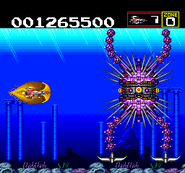 Retrieved from "https://darius.fandom.com/wiki/Leadain?oldid=12511"
Community content is available under CC-BY-SA unless otherwise noted.