King Fossil (キングフォスル) is a recurring boss and in many ways the mascot of the whole Darius Series. He has resurfaced in every Darius game except Darius Force, Darius Twin and G-Darius (but we meet some close relatives of him there). It sets the standard for the way all Darius bosses would make an entrance. It is shaped after a Coelacanth.

King Fossil is a flagship that is similar in shape to the coelacanth, Fossil I have believed that the series of the base ship. Although the same name of the ship species have been identified from long ago, evidence is isomorphic ship has not been confirmed. Improvement of the results over the long time, large number of blind spot that was seen in the early type, the smallness of the thermal power has been improved. In particular maneuver depth charge is a nasty attack, so as not to lose the escape, it is necessary to sufficiently secure the retreat.

A versatile battle mother ship with a coelacanth as a motif at the front of the Belsar who first contacted the Darius army. The main armed weapons contained in the mouth are diffuse particle guns, but the fighting power is not so high.

A battleship that brought great destruction ever since back when the Belsar army raided planet Darius. Its attack power has been increased more than before and there are additional weapons onboard such as large torpedoes and wider-area howitzers.

A battleship tought to be the base of the FOSSIL series. Altough a ship of the same name has been confirmed long ago, it is unknown whether its actually the same type of ship. Its equipped with depth charges and a burst beam, and the problems with blind spots and low firepower that existed in the previous model were improved.

Given that he is the very first boss, King Fossil has a very simple attack pattern and is fairly easy. He only moves up and down and occasionally opens his mouth, firing waves of three (Game Boy), four (GBA and PC-Engine) or five (Arcade) bullets in an arc. Since his mouth is his weak point, he can only be damaged when it is open. A good strategy is to get up close and bomb him from slight above his mouth when it opens.

King Fossil also appear shortly in Darius Force Prologue of Demonstration Mode as Cameo after his death from Original Darius.

King Fossil got a major overhaul for his appearance in Darius Gaiden, including a new light blue paint job and a much tougher attacking pattern. He will start the battle using the traditional arc bullet spread from his mouth, as well as sending anchor drones. After some damage, he will shoot his own scales at the player (which are indestructible), after which he will shoot bombs that explode into a circular bullet spread, as well as firing semi-homing torpedoes.

His pattern is the same as in its other incarnations, however you will fight it a second time and his attacks will be different. During the second encounter, its attacks will consist of two shots composed of two bullets orbiting each other, and two egg-like destructible bullets coming from both the top and bottom of its body, creating an arc pattern that closes at the end of the screen.

King Fossil appears in the NES port of Rainbow Islands, another Taito game. He appears as the Level 7 boss. His main attacks consist of shooting three fireballs at once and floating around the stage, trying to crush the player.

King Fossil reappears in the Mission Mode of Darius Burst: Second Prologue in a number of missions as a variation of Iron Fossil. Strictly speaking, though, it is just the placing of King Fossil's head onto Iron Fossil's body, and there are no changes in the attack pattern whatsoever.

King Fossil also reappears in some of the online events in Event Mode and in locations in Chronicle Mode. The appearance is the same as mentioned above for Second Prologue, except that there is a notable change in the attack pattern that makes King harder to fight. The original bullet arcs are replaced by lines of the purple orbs that explode after they hit the player or after they stop moving and pulsate. In addition, King will also spray these orbs out in random directions and distances every time he sheds scales. Other than that, there are no other changes to the rest of the pattern and King Fossil should easily succumb after following the usual strategy.

King Fossil's main weak point is his mouth, but it's damageable only when it's open and King Fossil only opens his mouth for attacking.

The upper and lower fins can also be destroyed for extra points.

As all Fossils, King Fossil is a coelacanth. The coelacanths are living prehistoric animals that lived for milions of years in the seas. Now only exists two species of coelecanths, both of them belong to the family Latimeridae. The most representative species is the common coelecanth (Latimeria Chalumnae).

King Fossil appears in Space Invaders 1995 as one of the three bosses riding the No. 106780 Yamato battleship in the Food level, who shields the other bosses (who are Darius bosses as well), before getting blown off the battleship by the player.

As seen in Darius in Zone A

As seen in Darius in Zone A

As seen in Sagaia (Gameboy) in Zone 1

As seen in Darius II in Zone A

As seen in Darius II in Zone V

As seen in Rainbow Islands (NES) 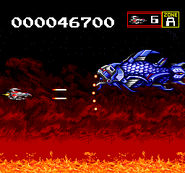 As seen in Super Darius II Zone A

As seen in Dariusburst: Second Prologue in Gallery Mode

As Seen in Darius Force as Cameo in Prologue

As seen in Dariusburst: Second Prologue in Mission 4-1 Zone

King Fossil's A Day in the Park Artwork 1

King Fossil's A Day in the Park Artwork 2

King Fossil's A Day in the Park Artwork 3

King Fossil's A Day in the Park Artwork 4

King Fossil's A Day in the Park Artwork 5

King Fossil's A Day in the Park Artwork 6

King Fossil as seen in Space Invaders infinity gene
Add a photo to this gallery
Retrieved from "https://darius.fandom.com/wiki/King_Fossil?oldid=11221"
Community content is available under CC-BY-SA unless otherwise noted.