Iron Fossil (アイアンフォスル) is the first boss from Darius Burst. It is shaped after a coelacanth.

Mankind has faced battleships bearing this form time and again and has come to call them “Fossils” for their resemblance to the coelacanth. This latest incarnation is identical in function to those encountered in 1904 D.C.--only larger. Its defining characteristic is the scale-like Chobham armor that coats the ship’s exterior, which serves to deflect and mitigate enemy fire. Perfectly suited for combat on the front lines, this plating proves the craft was designed to lead the interplanetary incursion. It is also from this armor that the vessel earns its “Iron” moniker. Slimmer than its predecessors, this version is thought to boast swifter attack speeds and to house a Burst Beam cannon in its tail.

We're covering the airframe surface with fine Cho Bam armor (composite armor). This can avoid an enemy attack, than to or to defend, while minimizing the main damage is the exterior for the purpose to fight in the forefront, assumes a battle with invasion target. So far from the same series ship that mankind has encountered, the hull structure has been streamlined, it suspects that the invasion speed also increased. It has a built-in burst beam cannon to stern.

Mankind is waging this type of isomorphic battleship and again and again battle, from similar its shape coelacanth, the same type of ship "fossil" means "Fosuru" is called. Although this emerging type weapon as compared to the same type ship checked in Darius calendar 1904 remains unchanged, the overall length is expanded. The biggest feature is that it covers the airframe surface with fine Cho Bam armor (composite armor). This can avoid an enemy attack, than to or to defend, while minimizing body damage, a sheathing for the purpose to fight in the forefront (assumes a battle with invasion target star) . Therefore "iron fossil" code name that means is attached. Than the same type ship that mankind has encountered so far, hull structure has been streamlined, it suspects that the invasion speed also increased. It has a built-in burst beam cannon to stern.

An assault-type battleship aimed at fighting at the forefront with a composite armor covering the whole body as a shield. However, the hull structure has been made slimmer than that of conventional ships of the same series, and the speed of invasion into enemy territory has been increased.

Iron Fossil, being the first boss of the game, is not very hard to defeat. For the entire fight, Iron will release the large anchor enemies. Its first attack is the old fashioned bullet arc from the mouth. (Note: In events or in Chronicle Mode, these arcs may be of several bullets in succession per wave rather than one at a time.) After it stops and closes its mouth, it will turn around in place and shed scales from its armor, all of which are destructible. Iron then turns slowly on his side and release lasers from top and bottom to minimize your movement. Turning back, this attack eventually stops, and Iron will shed more scales and turn its tail towards you. Red lasers come out straight from both tips of the tail as well as diagonally outwards. Iron readies its Burst Beam, and you should let yours release as well. Turning back, Iron sheds scales once more and then deploys large missiles that will eventually come up at you, and you should destroy or avoid them. Then the attack pattern repeats from the start until Iron is defeated.

Only an aesthetic change placing King Fossil's head onto Iron Fossil's body. When encountered in Dariusburst: Second Prologue, there is no change in the attack pattern. When encountered in Event Mode or in Chronicle Mode in Dariusburst Another Chronicle EX , there is a notable change in the attack pattern. The bullet arcs are replaced by lines of the purple orbs that explode after they hit the player or after they stop moving and pulsate. King will also spray these out in random directions along with the shedding of scales, so it makes fighting him tougher, but there are no other major changes to the overall attack pattern.

A palette swap to purple, Knight Fossil is the boss of Zone O in Dariusburst Another Chronicle EX and is more difficult with a few changed attacks. The bullet arc attack from the mouth is replaced with arcs of cube shots which come after the player following being shot, so now you must keep your distance. After the scale shedding, lasers in bursts of three going straight and at diagonals come from the top and bottom fins on Knight Fossil, which will encompass most of the screen so you will likely have to move more than in the fight against Iron. Another round of scale shedding, then the lasers from the tail tips, and then the Burst Beam you should counter. After turning around and shedding scales, the large missiles come out that you either shoot up or dodge, and then the pattern repeats until Knight is destroyed. 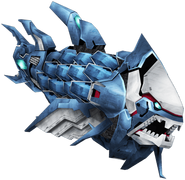 A figure of Iron Fossil
Add a photo to this gallery
Retrieved from "https://darius.fandom.com/wiki/Iron_Fossil?oldid=12847"
Community content is available under CC-BY-SA unless otherwise noted.