Hyper Sting is the first boss from Darius II. It is shaped after a lionfish (Pterois volitans).

An enemy battleship of the so-called "Alliance Army", composed of the same type of battleship from Belsar. Acting in pairs, it excels at combat by performing pincer attack formations against enemy aircrafts.

Hyper Sting is a very easy boss, it's only attack being shooting a laser with some bullets from its mouth, which is also its weak spot. After it is destroyed another Hyper Sting will appear from behind the player, and the Silver Hawk will turn to face it. Both of them can easily be destroyed with the smart bombs which appear during the fight.

On Super Darius II, its weak point is its entire body (mainly its head). 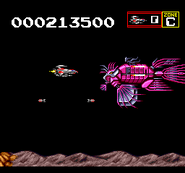 As seen in Super Darius II Zone C
Add a photo to this gallery
Retrieved from "https://darius.fandom.com/wiki/Hyper_Sting?oldid=12491"
Community content is available under CC-BY-SA unless otherwise noted.