Hungry Gluttons is one of the final bosses from Dariusburst. It is shaped after a piranha.

A Piranah shaped flagship of the Belsar army. It stations itself as the primary command vessil of the entire Belsar army. It launches multiple support fighters that are programed into change roles when needed. This warship can replace destroyed fighters by tapping into a sub-space pocket where many fighters are stored. The intention of this ship was simply to counter the new model Silver Hawks. It posses a Burst gun like all the other ships.

Flagship that is similar in shape to the piranha. Small ship work together around a large ship, the fleet to act as one of the flagship. Until now Berusa the Flagship and small combat machines, even to be deployed in the same area, were not able to work together is acting along the respective roles. In this flagship, the basic tactic itself of its Berusa has been converted. Further become a wonder, in the interior of the large ship, there is a small ship hangar, depending on the game situation, it is that you can add deploy a small ship. Because it can release a small ship beyond the internal space that is estimated from the appearance, the inside of the hangar, it is believed that using a system that employs a subspace technique. By rearranging the large ship and small ship formation, is capable of a variety of attacks, Hungry Gluttons various subspecies of other types have been identified. Burst cannon has the center of a large ship, small ship is responsible for the support at the time of launch.

The state-of-the-art Gluttons series ship operated by Belsar since the first attack on the planet Darius. The operation speed has been improved while succeeding in slimming and surpassing the power. The concept of cooperative attacks with onboard weapons has been carried forward. 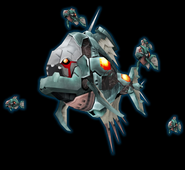 As seen on Dariusburst: Another Chronicle website
Add a photo to this gallery
Retrieved from "https://darius.fandom.com/wiki/Hungry_Gluttons?oldid=12851"
Community content is available under CC-BY-SA unless otherwise noted.