Hard Mollusk is a boss introduced in Super Darius. It is shaped after a Portuguese man o' war.

Hard Mollusk has a large body, which can make the battle quite difficult. It will attack by firing lasers from its head while shooting bullet arcs and anchor drones from the tentacles. The player must destroy the tentacles first to damage the boss, but that will also reduce its firepower considerably, making the fight easier. 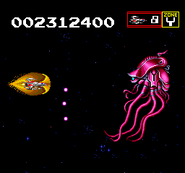 Retrieved from "https://darius.fandom.com/wiki/Hard_Mollusk?oldid=12343"
Community content is available under CC-BY-SA unless otherwise noted.