Guard Savage is a scrapped boss from the original Darius, later making an appearance in Super Darius. It is shaped after a Tiger Shark (Galeocerdo cuvier).

Interceptor ship with high mobility which appears in the mechanized city. Best suited as a gate guardian, it will launch a devastating attack with the primary purpose of eliminating foreign enemies.

Guard Savage's main form of attacking is to shoot a shark-shaped beam from its mouth. After firing it five times, it will attempt to ram the player, after which it will send anchor drones. Its mouth is its weak spot, but its fins can also be destroyed for extra points.

The only difference is its behavior since now it wont follow the player, increasing the chances of the player falling prey to the deadly beam which now moves faster than in other games.

As seen in Darius Alpha (Screen Cap taken by Tar-Palantir) 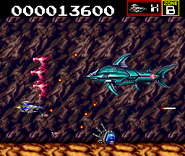 Retrieved from "https://darius.fandom.com/wiki/Guard_Savage?oldid=12339"
Community content is available under CC-BY-SA unless otherwise noted.