Green Coronatus is one of the final bosses in the original Darius. It is shaped after a seahorse (Hippocampus coronatus).

The attack ship with the most offensive power of the Belsar army. It stands against the Silverhawk trying to break trough the final line of defense. Its weak spot on its head is protected by a solid composite armor.

Green Coronatus will attack by sending homing anchor drones from its head and shooting aimed two-bullet arcs from each of the body's segments. It will also fire a straight laser from its tail if the player gets into horizontal range with the tail. The boss can only be damaged in the head, but the player must destroy the helmet first. The tail is also destroyable.

During the first encounter it will shoot a three bullet arc, laser from the orb located in it's belly and a homing missile from its snout. If the player destroys the part of the body that creates the bullet arc, it will begin to shot 2 missiles from snout, a straight bullet from the tail and the belly laser gets replaces by an egg-like orb that flies in an arc

On the second encounter it will use two laser shots from its belly, the usual missile from its snout, a wave shot from its tail and the same old bullet arc which now goes in a wave-like motion. Like before, destroying the source of the bullet arc will make it shoot two missiles, two wave shots and the usual egg from its belly.

Green Coronatus (and all other Coronatus family boss) are named after the Crowned Seahorse (Hippocampus coronatus), although only Lightning Coronatus that's not based of a seahorse but rather a Weedy Sea Dragon, similar to Deep Dragon.

As seen in Darius Zone W 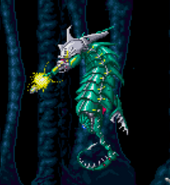 As seen in Darius II Zone B
Add a photo to this gallery
Retrieved from "https://darius.fandom.com/wiki/Green_Coronatus?oldid=12493"
Community content is available under CC-BY-SA unless otherwise noted.