Gigantic Bite is the final boss from Dariusburst Chronicle Saviours, appearing exclusively on the CS Mode. It is based on the Dunkleosteus terrelli, an extinct Placoderm fish.

It is by far the hardest Dariusburst boss, if using a ship with Burst, otherwise it would be the second hardest, right below G.T.B, and it is the hardest boss in CS mode. It appears in several stages, like the last stage, and Bedon, where you exclusively have to fight him, however in every other stage than the "final" stage, the boss takes a small amount of damage before the boss fight begins.

Music being played is:

Battleship shaped like the ancient fish Dunkleosteus. A large battleship that is the main source of attacks on the subspace communication networks. Not only it performs as a battle fleet but also posseses amazing attack power by itself. In addition to burst guns, which can provide frontal offensive power as high powered ultra long-distance lasers, theres no escape at close range from the space breaking guns and small missiles launched from the whole body.

Gigantic Bite makes its entrance biting a large segmented battleship, whose pieces come tumbling down at the player. After that it will scatter large scales (much like King Fossil) and shoot three homing blue lasers. It's recommended to use a fixed burst cannon to deflect the scales.

On the second phase it will turn on his belly and fire two lasers while shooting fireballs in between the lasers. After a while it will shoot its burst beam, while twin electric drones will appear from behind.

During his third phase Gigantic Bite will fly to the top of the screen and shoot a constant stream of pin bullets towards the bottom, while a Rolfosteus appears on the middle right. The Rolfosteus will fire turning orange lasers and the burst cannon, while the twin drones will come from right to left. A good place to stay is behind the Rolfosteus and close to Gigantic Bite.

After that Gigantic Bite will go to the left and release lots of bullet capsules (of the type that releases bullets when destroyed) and shoot purple lasers as well as the twin drones. After that the fish drone will appear on the bottom left, while Gigantic Bite shoots pin bullets and fireballs constantly, as well as destructible missiles.

Gigantic Bite then has a ton of different attacks, that can appear in random order, but to begin with, it's either on of these:

Then, these attacks may happen in a random order, with a couple of exceptions:

Then one of these things can/will happen:

The entire thing is repeated.

NOTE: This is only a rough guide, since this boss is the second most unpredictable one in the game, on top of being the hardest boss when using a burst ship (The most unpredictable being Phantom Castle in castle form), the described attacks may come in an entirely diffrent order.

As seen in Dariusburst Chronicle Saviours in Ruminia Zone Delta

As seen in Dariusburst Chronicle Saviours in Ruminia Zone Delta

As seen in Dariusburst Chronicle Saviours in Bedon Zone Alpha 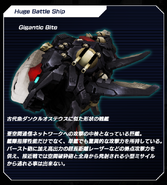 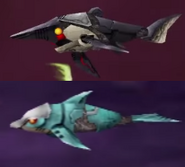 Add a photo to this gallery
Retrieved from "https://darius.fandom.com/wiki/Gigantic_Bite?oldid=12617"
Community content is available under CC-BY-SA unless otherwise noted.