G-Darius is a shoot 'em up video game released for the arcades in 1997. It is the sixth game in the Darius Series, and a prequel to the original Darius, thereby making it the first game in the series canon.

An HD remaster entitled G-Darius HD will be included in the Darius Cozmic Revelation compilation, scheduled for release in 2021.

In the vastness of universe.
The life born on that planet became civilized, fought, and was at risk of extinction. But the war ended with the appearance of a man. That man's name was Amnelia. People honored their own planet with his name, but no one noticed the presence of the "power" which led him to become a savior.

Amnelia's royalty held a mysterious power for generations, and Amnelia's 21st king Brezza was no exception. A king and genius scientist, he got immersed on his research for new energy sources. Amnelia used a energy generated from the soil called "Kaju", but since "Kaju" was responsible for the flourish of green trees, which could be called the life of Amnelia, it was not a infinite energy source and that had become a serious problem.

In Amnelian year 547, King Brezza finally found a way to produce the ultimate energy source. Amnelia's energy crisis was completely solved. "Soon our mother planet will be unable to sustain our prosperity. When that day comes, I promise to give everyone a new Earth."

People began to emigrate to Amnelia's satellite Blazar, and 50 years have passed. It is an era where humankind seems to have mastered peace.

However. the same mistake from 600 years ago was about to repeat itself...

Genocide -The Devil's Power "A.N." and the Mysterious Invaders-

Tensions between Amnelia and Blazar reached their limits, and a interstellar war broke out over the acquisition of another of Amnelia's satellites, Martha. Scientists who were studying new weapons amidst the fierce battle have finally created the power of the Devil. The Devil's name was "All Nothing". It is the name of a weapon that nullifies anything, and its flash wiped out the satellite Blazar from existence...

Those who realized their mistakes abandoned their weapons and began the path to peace and reconstruction. At the same time, in Amnelian year 609, a new life is born from Amnelia's blood. The boy who was the last Amnelian born during the war became their 25th king.

The young king's "ability to see the future" laid the fate for the people of Amnelia, who rejoiced the birth of the new king. "Be prepared! They are coming!" were the king's first words.

Three years later, "They" came.
The Royal Space Force was intercepted in the satellite Martha, disappearing a few hours later after witnessing the flash. At the same time, two thirds of the population got decimated. Later investigation revealed that the enemy force which fought in Martha was only leading reconaissance. People have come to call the unknown invaders "Thiima" (Messenger of Death)...

Gain Over -The Birth of Silver Hawk-

"This is our only hope for survival."
The Amnelian civilization couldn't fight the Thiima. The King's last strategy was to create a fighter which combined the power of the Thiima with the demonic power of A.N. which once destroyed their world. The scientists completed two state-of-the-art fighters equipped with an A.N. engine based on the enemy aircraft obtained in the battle at Martha in order to realize the King's words. The fighter was named "Silver Hawk", after a legendary bird that was said to have led the world with Amnelia the 1st.

King Amnelia spoke to the two young Silver hawk pilots. "You will see the birth of new lives..."

G-Darius is the first game in the series to use 3D polygonal graphics, though it retains the two dimensional gameplay of previous titles. The game plays much more closely to the original Darius, with the Silver Hawk having three power meters controlling the power level of the forward-firing guns, missiles and shields, with the ship retaining its power levels only when fully upgraded to the next level.

New to G-Darius is the addition of the Capture Balls, which expand on the concept of capturing midbosses introduced in Darius Gaiden. The player comes with a limited supply of these, and can use them at anytime. When an enemy is hit by a Capture Ball, it will be captured and follow the player's ship, adding to its firepower. Captains can be captured in the same manner, though since they have a plating which bounce off the balls the player must first break their plating before capturing them.

Captured enemies can be detonated at any time, creating a concentrated explosion which acts as a smart bomb, or absorbed to charge the Alpha Beam, a large beam which instantly vaporizes most enemies and deals heavy damage to larger enemies and bosses. Bosses can use a similar beam called Beta Beam which, when colliding with the player's Alpha Beam, begins a tug-of-war where the player must mash the fire button (or, in the case of Ver. 2 and the console ports, simply hold the autofire button) in order to absorb the boss's beam, causing the Alpha Beam to grow larger and causing massive damage to the boss.

Based on the player's overall gameplay performance, there is a ranking title given at the end of the game. These titles are named after birds — in order, they are Duck, Owl, Crow, Swan, Eagle, Condor and Hawk — with Iron, Silver and Gold places. While your final score does not affect this ranking, doing well in each of the factors will increase your score. Every factor is worth somewhere between 10-20% out of a total of 105%, and the coveted Gold Hawk rank requires the player's total to be 101% or higher.

G-Darius features only five tiers of stages, compared to previous titles which had seven tiers, though each stage has a fork in the middle which leads to two different areas within the stage. Each of the bosses have a different color (except for the two Fossil bosses) and attack pattern depending of which path the player took in the stage.

A second version of the game was released in the arcades in 1999, with the following changes:

G-Darius was ported to the Sony PlayStation in 1998, and to the PC in 2001. In addition to the original game (labeled as "Arcade" mode), these versions also included a "Beginner" mode, "VS-BOSS" mode, autofire and an option screen where the player could view cutscenes from the game.

The game was also included in the PlayStation 2 version of Taito Legends 2, released in 2006. It was a direct port of the original arcade version and thus did not include any of the changes from the other ports, nor Ver.2, however the Taito Legends 2 port has loading screens in a similar way to the PlayStation port.

The following information comes from the broadcast of ZUNTATA NIGHT11 on November 20, 2020. Things are subject to change between now and the final product.

The new HD-enhanced port of G-Darius, besides having smoother graphics, also provides some quality-of-life changes, shown on either side of the play area in a side bar. Your current ARM strength is shown on the top. There is an Alpha Beam Power box in the middle which shows duration and level of your beam, as well as the current score rate. Finally, there is a box to count the Bonus Silver power-ups, with a counter for each point value shown.

Within the pause menu, there is a Capture Gallery - common enemies are in one section, and the Mid Bosses are in the other section, along with the input commands for the special attacks. While the mid bosses' HP values for encounter and post-capture are listed in this section, there are no HP values to be seen while in play; still, having these values present is certain to be of help to high-level players for tracking mid boss health during play. Past this, there is an achievements list.

On March 18, 2021, the official Taito Youtube channel posted a video both with and without English subtitles, wherein Yuichi Toyama from Taito as well as both Naomi Horii and Yukiko Karashima from M2 Shot Triggers announced that Ver.2 of G-Darius will be added to the game in a forthcoming Summer 2021 update, along with the use of gadgets familiar to M2STG players. 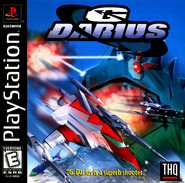 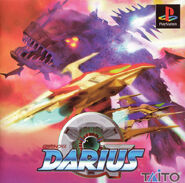 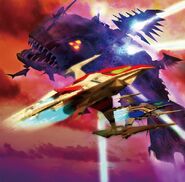 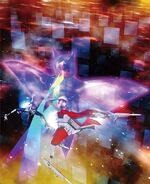 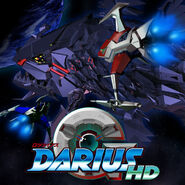