Darius year 1904: Belsar attacked Darius, which had been revived by the people who immigrated from Vadis. The oppening approach that the Belser struck first with was a Virus that knocked out all inter-planetary communication systems. During this chaos, the Belser struck hard and delt a hefty blow to the Darian forces. Destroying the entire fleet in the blink of an eye. Out of the wreckage, two new cutting edge, new model Silver Hawks, equiped with the brand new Burst technology were entrusted to the humanoid AI Terminal Ti2, and test pilot Riga Practica. Together, with the Silver Hawk Burst fighters, the heroes face nigh-impossible odds as they fight alone against the Belser Fleet.

Dariusburst keeps with the same gameplay systems from previous installments, with the player's ship being equipped with forward-firing shots, bombs and a shield.

New to this installment is the Burst mechanic, which replaces the Alpha Beam mechanic from G-Darius. By pressing the Burst button, the player ship will fire a thick laser forward which rapidly consumes the meter at the bottom, while quickly tapping the button twice will fix the laser cannon in place, consuming less meter. Depending on the ship's mechanics, releaseing the fire button with the Burst laser in place will make it turn either in the ship's direction or to the opposite direction, giving it more strategic uses. Additionally, bosses also come equipped with their own Burst Cannons, allowing the player to counter them with their own by pressing the button at the exact time the boss cannon is fired or by moving into the boss's laser and pressing the button as the laser hits the ship; this will strenghten the player's laser while allowing it to consume less meter. The meter constantly refills by destroying enemies.

The standard version of Dariusburst was released in Japan on Christmas Eve (24 December) 2009. A "DX" version was also available for pre-order.

In addition to the game the DX version also include:[8]

The game received no US nor European release, despite being rated at least for European territories in 2010.[9]

A mode similar to the original game's Mission Mode. 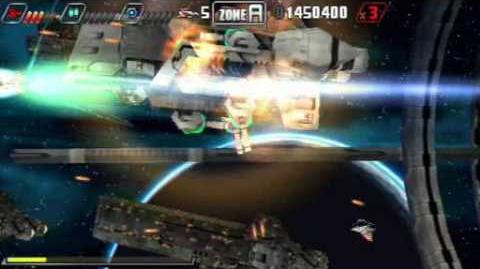