Darius Twin is a shoot 'em up video game released for the Super NES in 1991. It was the first new installment in the Darius series to not be originally designed for the arcades, and also the first to have a normal 4:3 screen-ratio. Interestingly, while it's a unique game in the Darius series, it appears to reuse sprites and background designs from Darius and Darius II. Also, while the names of the bosses are new, they really are reworkings of previous bosses for the most part.

Once, many millennia ago, the young, tranquil world of Darius was invaded by a race of star-hopping barbarians under the command of galactic tyrant, Belser. The peace-loving Dariusites were ill-prepared for such an invasion and most fell quickly. However, before the entire planet succumbed to Belser's domination, a brave young couple, Proco and Tiat, led a resistance effort and managed to escape with many of their fellow Dariusites to sectors of space that were still free.

As the centuries passed, the descendants of this resistance movement multiplied and prospered, and populated many worlds. On Orga, a world of uncommon resources, they established the command center for the Galactic Federation, a governing body that united all the peaceful worlds of the galaxy. After a thousand years, the forces of Belser again decided to expand their empire and headed spaceward to conquer the people who escaped them centuries earlier. Branching ever outward, Belser seized control of even more planets in the solar system.

Inspired by the legends of Proco and Tiat, two of the Federation's best pilots now ready their spacecraft for the long galactic battle that awaits them. These vessels, advanced technological miracles called Silver Hawks, are able to transform energy into powerful weapons and armament. It is your mission to pilot a Silver Hawk, defeat Belser's forces on each of the planets along your selected route, and reach Darius and destroy the formidable Alloylantern, a mechanical fortress from which all of Belser's technological strength springs. Belser's original world remains unknown, but the most noted scientists believe that it was largely oceanic because all of Belser's technology seems patterned after aquatic lifeforms.

Darius Twin carries most of the gameplay mechanics from its predecessors, with the Silver Hawk's weaponry being mostly based on the second title. Unlike other titles in the series, the Silver Hawk never loses its weapons upon dying, though the game has no continues to counterbalance that.

Following the tradition started in Darius, the game levels are in a grid like setup. While this game in the series is a scaled back simply release, it has been set up by "Stages". All full play-throughs have seven stages (three don't have alternate choices).

First stage has only one Zone (A: Rilair). The second stage of Darius Twin splits in two selectable zones, Zone B: Danto, and Zone C: Koloba. Stage 3 once again is only one choice zone, Zone D: Lankus. Stage 4 gives the choices of Zone E: Padi or Zone F: Rear. Stage 5 is the only tier to have three choices for stages. Stage 5 choices based on previous zone completion were Zone G: Narukini, Zone H: Karudo, and Zone I: Sabia. Stage 6 has two choices for Zones; Zone J: Noeru and Zone K: Horolain. Stage 7 finishes with only one Zone, Zone L: Darius. 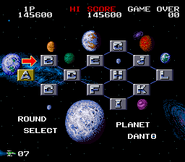