Darius Ocean is a shooter game released in 2004 for NTT DoComo mobile phones in Japan only. The game was only available for purchase through the Taito G@me Park i-mode service.[1]

Note that this was translated from Japanese to English. This means some guess work went into it.

Darius Ocean plays similarly to the Arcade game Depthcharge/Sub Hunter. The player controls the Silver Hawk, which stays above the water and only moves left and right, while enemy waves move below it inside of the water. The Silver Hawk attacks by dropping missiles and depth charges, powered up by the red and green orbs respectively, and can also be equipped with the shield arm powered up by blue orbs.

The game features the same bosses and branching system from the original Darius, with stages being more or less based on those from that game. 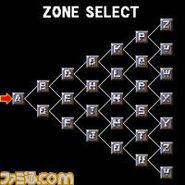 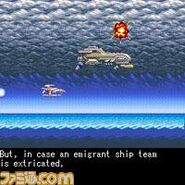 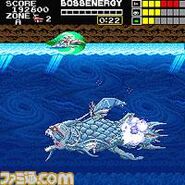 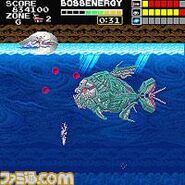 Add a photo to this gallery

Retrieved from "https://darius.fandom.com/wiki/Darius_Ocean?oldid=13768"
Community content is available under CC-BY-SA unless otherwise noted.