Darius II is a shoot 'em up video game originally released in 1989 by Taito for Arcades. It is the first sequel to Darius and fourth in the series' timeline. The game also continued to use the triple-screen setup used by its predecessor, although some machines ended up being only two screens wide. This game was localized in English as Sagaia.[1]

The planet Darius, which formerly boasted a very advanced civilization, has been destroyed. Proco and Tiat escaped from Darius in search of a new world. They started a new civilization on the planet Olga. The descendants of Proco and Tiat happened to pick strange radio waves being emitted from the Milky way galaxy. The strange radio waves were an SOS from the planet Darius where their ancestors used to live. Having discovered the source of the strange radio waves, the immediately boarded the Silver Hawk, whose power had been greatly increased, and took off for the Milky Way. A fierce battle ensued on the planets of the Milky Way and in outer space in order to save the inhabitants of Darius from destruction.

Darius II plays much like it's predecessor, while changing a few things around. The Silver Hawk still comes equipped with a forward-firing gun, bombs and the Arm, with the new addition of lasers, which fire at straight angles upwards and downwards, adding to the ship's firepower. These are upgraded with colored medals, much like the orbs from the previous game, which are dropped by specific formations of enemies.

Darius II ditches the weapon tier system from the first game, meaning the ship will power up constantly instead of in small increments. However, each death will resets the ship's upgrade to the lowest level, making it considerably harder to recover power on the late game.

This game also ditches the end-level forks, replacing these with a map where the player manually selects the next level. This system would be used in all subsequent games in the series. Also new is the presence of Captains, stronger enemies wich act as mid-bosses, which in this game are based on the bosses of the previous game.

Sagaia, not to be confused with the subsequent ports of Darius II or the scaled down Game Boy version of Darius, is the name of an arrangement of Darius II with two versions made for arcades outside of Japan. Both versions have been rereleased alongside Darius II in Darius Cozmic Collection.

Version 1 has fewer, shorter, and different zones than Darius II, along with a modified level of difficulty for the purpose of ensuring faster play cycles in overseas markets. The solar system design has been omitted from the zone selection screen.

Version 2 has the same zone map as Version 1, but the zones have different backgrounds and more captains. Some bosses like Alloy Lantern also have modified patterns. This version is rarer, as it was hardly marketed.

Darius II was also ported to a handful of systems. The only direct port of the game was released for the Sega Saturn in 1996. The original widescreen setup was preserved for this port, which could be zoomed out or in, depending on the player's preference. 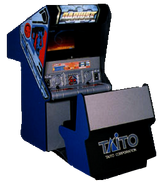 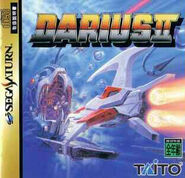 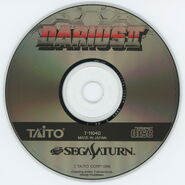 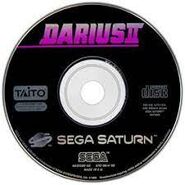 Sagaia arcade title screen. This is for the Western version of Darius II. 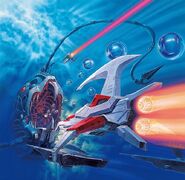