Darius Force, also known in North America as Super Nova, is a shoot 'em up game released for the Super Nintendo in 1993.

Translated from the Japanese manual:

The history of human fighting has continued since human ancestors grabbed the bones of beasts.

A long, long time has passed since the last battle with the enemy "Belsar", and the descendants of the planet Darius continued to thrive in permanent peace. They pioneered and established hundreds of planet states, established the Galactic Federation centered on the planet Olga, and were committed to mutual security cooperation and non-aggression between states. Even after thousands of years, the power that never fades, the growing machine “Silver Hawk”, a formal fighter of the Galactic Commonwealth Army, was deployed as a standard fighter in all federal member states and was in charge of security.

The wise men of the past had ordered numerous enhancements, improvements and mass production, in preparation for the imminent return of the invaders. Everyone has long since received the legendary names of two former heroes, Proco and Tiat, as legends. Young generations who wish to fight in such an era are considered foolish.

However, the history repeats itself. Now again, new war fronts are about to be opened in the corners of the galaxy. The huge and unknown enemy is different from the former “Belsar”. No, the former "Belsar" was only a small part of a larger army!

Darius Force brings some drastic changes to the gameplay compared to other games of the series. At the beginning, the player can choose between three different ships, each with it's own weaponry:

Shots and bombs are fired by separate buttons, though this they power up at the same time when the player picks up a red icon. If the player fires both at the same time, their fire will be powered down by a level, meaning they only fire at the current level when not used together, adding a layer of strategy. By pressing the shoulder button the player can alternate between regular bombs and lasers. Dying will remove all of the ship's upgrades (with exception of the shield) and return the player to a checkpoint. Using a continue will reset both power and shield upgrades. 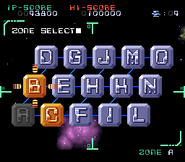 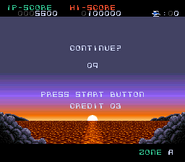