Darius has had a variety of cameos on many other Taito titles as well as a few ones in other media.

BreakThru is a top-down run and gun made by Data East in 1986. It features a small cameo of the Silver Hawk in the hanger of area 5.

The silverhawk ship in the background

Ultrabox was a series of PC Engine discs that included a variety of software, including mini-games. The sixth (and final) release includes a Darius parody called Dasaiyas, a shooter where you control a flying sushi chef fighting fish. 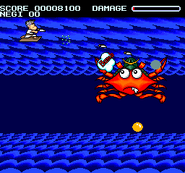 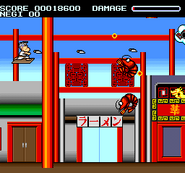 Bubble Symphony (also known as Bubble Bobble 2) has a whole world of rounds which are based on elements of Darius II called Sun "A" Zone which has the background of Zone A in Darius II and has two small enemies that appear to be Strong Shell and Killer Higia.

In Puzzle Bobble (also know as Bust-A-Move 2) King Fossil appears in the ocean on the map of the world. He also appears in the constellations during the ending with a Silver-Hawk.

King Fossil and a Silver-Hawk appear in the ending.

Before the fight against the final boss a message "WARNING!! A HUGE BATTLE SHIP CODE NO. CR20 - 100190 Mechanical Prototype Bubblen IS APPROACHING FAST" is written with the sound effect from Darius when the boss appear.

The boss are presented the same ways as the bosses from Darius series.

Electric Fan as seen in Round 36

Growl, known as Runark in Japan, is a Taito beat 'em up released in 1991. In the japanese version of the game, the game's antagonists are named the Belsar Corporation of Animal Protection. While the game's connection with Darius is never apparent (you fight regular human poachers through the game), the final boss and leader of the poachers, which initially appears as a hunchback in a ringmaster attire, suddenly reveals itself to be a giant alien caterpillar monster.

Space Invaders '95: The Attack of the Lunar Loonies

The boss of the second planet named Gourmet Star, is a wood ship with King Fossil, Vampire Squid and a fried fish on it. The message "WARNING!! A HUGE BATTLESHIP #106780 Yamato IS APPROACHING FAST" also appear before the fight with the same sound effect from Darius.

The boss of the third planet named Summer Star, is a female in hermit crab attire which looks to be in part based on Yamato, especially the shell.

Aero Fighters 3 / Sonic Wings 3 was the third title of Video System's Sonic Wings shoot 'em up series. One of it's possible final bosses, Soh Takeko, spoofs the classic introduction of the Darius bosses.

Arkanoid vs Space Invaders is a game released for iOS and Android compatible devices which combines the gameplay of both Taito's franchises. The game also features 40 unlockable characters which give special abilities to the player, all of which come from other Taito fanchises. Quite a few of these come from the Darius series, including Proco, Riga Pratica, TI2, Iron Fossil and Great Thing.

Bubble Bobble 4 Friends is a game released for Nintendo Switch and PlayStation 4, it is the reboot game of Bubble Bobble series, the music during fourth world called "Cosmic Canopy", a sci-fi and space-themed world, Cosmic Canopy music is an arrangement and instruments using Darius-style beats, and other beat that heard like "Cosmic Air Way", and it's refers this world's name.

GUNBare! Game Tengoku 2 is a vertical scrolling shoot 'em up for the PlayStation, and is the sequel to Game Tengoku. One of the bosses is a parody of King Fossil.