For other uses, see Darius (disambiguation).

Darius is a shoot 'em up game originally released by Taito in 1986 for Arcades. It is the first game in the Darius series and second in the series canon. It was the first game by Taito to use a unique triple-screen setup, which utilized three monitors (with the center monitor facing forward and the outer two pointing up) and a mirror to make the three screens appear seamlessly connected. All ports of the game had to account for a single screen as a result. The game is two-player with the pilots being Proco and Tiat, who fly the Silver-Hawk model 3F-1B against Belser forces.

The vicious Belsar have attacked the peaceful Darius system, which now faces absolute devastation at their abominable hands! Darius' defense fighters proved no match for the overwhelming firepower of the alien forces, which wiped out their entire fleet in one fell swoop!

With nothing left to protect them, the people could only sit and wait for the icy embrace of death as the satellite bombardments continued unopposed. The scent of despair hung thickly in the air, all hope of survival having been quashed.

But then, from out of the darkness of the mourning clouds came a single bright light in the sky.

Like a phoenix brought forth from the embers of a burning world, the bird shaped visage became a beacon of the planet's last fight for survival! Perhaps the end is not as nigh as it first appeared.

The player flies an ornate fighter craft called the Silver Hawk. The craft is equipped with two attack weapons: Missile, which is the forward gun, and Bomb, which are the ballistic bombs dropped from the craft. A third capability of the craft is referred to as the Arm - a green energy shield that can absorb a certain amount of damaging impacts without harm to the ship.

During the course of each Zone, or stage, the player must navigate and battle through a variety of Belser fighter craft, ground vehicles, turrets, and other obstacles.

At the end of every Zone, the terrain fades away and the game issues a textual warning of the form "WARNING! A HUGE BATTLESHIP x-y IS APPROACHING FAST.", where x is the name of a boss and y is a letter identifying the current Zone. The player then arrives in a tunnel where the boss resides, and must defeat the boss in order to progress to another Zone. The bosses in Darius, although mechanical, are frequently in the form of aquatic animals, such as a fish or a squid.

If the player defeats the boss, the tunnel splits into a fork and the player must decide whether to take the upper or lower tunnel, both of which lead to different Zones. This allows many different paths to be taken through the game and increases the replay value.

Power-ups can be obtained by shooting enemies of a certain colour. The power-ups are in the form of coloured, glowing orbs, and the colour corresponds to one of the three weapons, as follows:

Collecting an orb powers up the corresponding weapon, and highlights a new division on the corresponding power-up bar. The Arm, if it is diminished or absent at the time of collecting the blue power-up, is regenerated and powered up.

If the player powers up a weapon eight times, the weapon changes to a new, more powerful type. When the Silver Hawk is destroyed, the player keeps the weapon tiers intact, but their levels are reset to their lowest.

There are three other power-up orbs which can be obtained by shooting at certain points of the terrain. However, there are no visual clues as to where these may be until the player fires at them, in which a sphere will flash briefly to indicate they have found a hidden power-up.

Both Guard Savage and Big Rajarnn were supposed to be included in the game, but ultimately scrapped for unknown reasons. Their sprites can still be found on the game's data.

The original Japanese flier also shows pictures of Guard Savage and Big Rajarnn (in the spread on page 4), as well as Hyper Sting and Mystic Power (on the front page).[2] This could suggest that Super Darius was actually the game Taito had in mind, as all bosses shown in the flier are accounted for in that game.

Released only in Japan in 1986, Darius: Extra Version is a limited revision of the game which added extra enemies in the stages and also instated a point limit for bosses. This prevented players from "milking" bosses for extra points.

Just like its international counterparts, this version also allows players to continue after losing all lives by inserting more coins (if necessary) and pressing START before time runs out. However, this feature will still cease to be available once one of the final zones is reached and can be disabled entirely for operators who dislike it by changing a DIP switch setting. Furthermore, the inability to continue cannot be bypassed by having a second player to join in.

While Darius never received any direct ports at the time, there have been a fair number of modified ports of the game for home consoles: 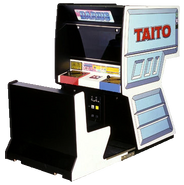 Concept art for the moon levels