Cuttle Fish is one of the final bosses in the original Darius game. It is shaped after a Giant Squid (Architeuthis dux).

An attack ship with 10 all-range laser guns exceeding Octopus. From the main body, the diffusion particle gun on the leg units which can simultaneously attack in a wide range performing rapid bursts of the laser cannon.

Cuttle Fish's pattern is simple but aggressive. From it's two tentacles it will shoot homing fireballs, while shooting lasers from it's mouth. The mouth is the boss's weak point, but the tentacles can be destroyed.

Cuttle Fish appears as a captain in the Moon areas. It behaves much like in the original game, but can only be destroyed after the player get rid of it's tentacles. It is possible to use the smart bomb on it, but the player needs to be patient.

Cuttle Fish fights in the same way as the original and, in the first match, its energy balls can be destroyed. In the second match it will use waveshots instead of energy balls.

As seen in Darius in Zone Y 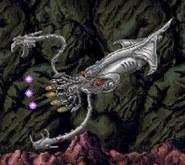 As seen in Darius II in Zone G

As seen in Darius II in Zone Z

Retrieved from "https://darius.fandom.com/wiki/Cuttle_Fish?oldid=12502"
Community content is available under CC-BY-SA unless otherwise noted.