B-System is a freeware shooter game created by Chinchilla Softhouse. This game is basically a boss rush, which features bosses that look like many of the bosses in the darius series, if not a more realistic take on them. Oddly while Coelacanth isn't a enemy to fight in the game, he does appear on the title screen.

There isn't too much information about the story. It only involves a single ace pilot engaging a fleet of Belser/Thiima inspired mechancial sea creatures.

While the enemy designs are inspired by Darius, the gameplay and power-up system is mostly inspired by the Gradius series.

All boss names are named based on the fish they are based on. There are no official names to the characters. 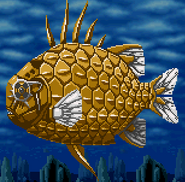 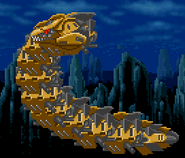 Seahorse
Add a photo to this gallery

Add a photo to this gallery
Retrieved from "https://darius.fandom.com/wiki/B-System?oldid=11132"
Community content is available under CC-BY-SA unless otherwise noted.