Azure Nightmare is a boss from Dariusburst Chronicle Saviours, appearing exclusively on the CS Mode. It is based on the Blue Angel (Glaucus Atlanticus).

A type of battleship with a shape resembling a Blue Sea Slug. With its distinctive shape and movement reminiscent of a mollusc, its an overwhelming sight. Besides a volley of several compressed particle guns, it has also been confirmed that it developed a defensive field called "Burst Eater" which absorbs and reflects burst weapons that hit the area which it sorrounds.

Unlike all other bosses in the game, Azure Nightmare is not a Belsar battleship. It is a Thiima artificial intelligence who exists within the Hyperspace Communications Network. It appears at later missions in CS mode, attacking the Belsar forces and eventually communicating with the heroes through radio. During the final mission, it warps the Silver-Hawk Legend straight after Gigantic Bite. 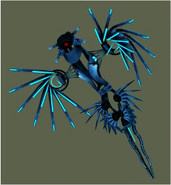 Dariusburst: Chronicle Saviours
Add a photo to this gallery
Retrieved from "https://darius.fandom.com/wiki/Azure_Nightmare?oldid=12788"
Community content is available under CC-BY-SA unless otherwise noted.