Ancient Dozer is the boss of Zone B in Darius Gaiden. It is shaped after a horseshoe crab.

A ground-fighting battleship with a huge caterpillar. Although mobility is sacrificed on its tank form, it is capable of shifting to a highly maneuverable flight form by separating the rear part.

Ancient Dozer will jump into the screen then move along the ground. For the most part he will shoot lasers from the two turrets on his abdomen and launch homing missiles from the opening above the turrets. Both the turrets and the opening can be destroyed. He will also release floating crustacean drones, some of which will detonate into energy balls aimed at the player. He will also sometimes move into the background to shoot the energy balls.

After taking enough damage, Ancient Dozer will start floating, then shed out his external armor for the second phase of the fight. He will constantly shoot lasers from his abdomen and eyes, as well as launch homing missiles and the floating drones. His legs can be destroyed for extra points. 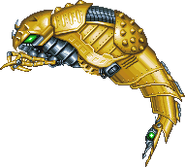 Darius Gaiden
Add a photo to this gallery

As seen in Darius Gaiden in Zone B (Screen Cap taken by Tar-Palantir)
Add a photo to this gallery
Retrieved from "https://darius.fandom.com/wiki/Ancient_Dozer?oldid=12450"
Community content is available under CC-BY-SA unless otherwise noted.